CHOIRS ON THE QUAY: Choirs will be performing throughout August every Thursday from 8.00-8.30 pm; POOLE QUAY…. celebrating Sea Music Sculpture.

Regular workshops and Taster Sessions are becoming available for those interested in exploring their vocal skills run by Be Your Voice practitioner Brigitte Deneck BeYourVoice.co.uk

Bourne Harmony sang Christmas carols for the shoppers at Boscombe’s Sovereign Centre. The performance was part of Boscombe’s “Great Exhibition”

The Ali Sharpe Choir, Bourne Harmony, Angellium and a number of soloists joined together for a feast of music to celebrate the arrival of Spring.

Bourne Harmony celebrates the first day of Spring with contributions from voices of all ages and some stage debuts. Pictured are just a few of those who took part.

Here is a video of one of the songs at the concert.

Chanting in the Spring

Bourne Harmony forms a Chanting Circle at a Spring equinox celebration to herald the new season.

The Marriage of the Sea

Ali composed and arranged the choral music for this very English reworking of the old Venitian tradition. It was performed in September 2013 as part of Bournemouth’s annual Art Festival by the Sea and featured around one hundred actors and singers. In the story the virgin brides are lured into thinking that they will be symbolically “married to the sea” for the good of the town. But darker forces are at work. After a ritual parade down to the sea they in fact simply disappear, never to be seen again.

Song for the Winter Solstice

Customers at a Bournemouth bar were bewitched on the night of the Winter Solstice as Ali Sharpe and the nine members of her Acapella Choir appeared in the costume of druid priestesses and wove a spell of close harmony singing that echoed back across thousands of years.

Bournemouth saw a unique, unsettling and totally immersive occasion – the artistic recreation of a long forgotten “Grotesque Carnival Parade” that had been staged in the town a century earlier. Ali Sharpe was the driving force behind the musical dimension of the event. She wrote the music which consisted of multilayered harmonies performed by a choir of 50 women dressed as eerily white-faced Edwardian suffragettes.

After training and rehearsing the choir she conducted and led them in a slow march from the Pier to the town centre. Together with the other elements of the parade, they moved in time to the steady hypnotic beat of drums as she directed them with the aid of a megaphone and a mobile pulpit.

The choir received a warm welcome at St Mark’s Church in Florence and the “host town” of Montecatini Terme where over 300 of the townspeople turned out to attend the open-air evening concert performed on the steps of the “Basilica”.

The choir received a standing ovation for their energetic and inspirational performance. 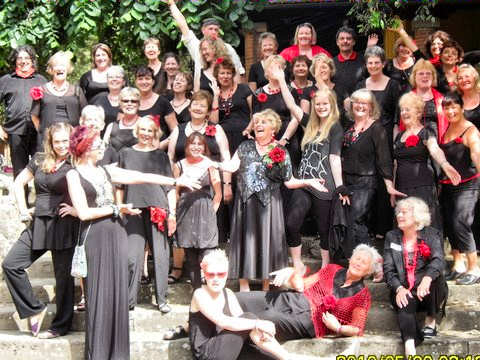